In which I finish creating a monster: the Franken-Coat!

In last week’s Part 1, I got started on this experiment in the CYC lab. Preparations for this radical disassembly-shuffle parts-reassembly project involved analyzing the 2 thrift-shop jackets for compatibility, doing a folded mock-up, and finally, rather extensive surgical (scissor-al?) procedures on both jackets. Here’s a quick recap:

Franken-Coat prep. At top left and right are the 2 thrift-shop jackets I started with, and the jacket parts after cutting them up are shown at bottom. (Details of this process are in Second Coating, Part 1.)

Now that everything is ready for the next step, I’m scrubbed and ready to sew!

*Yes, I know that sounds like more work, but in the long run, I think it will be worth it. For one thing, even though both original linings are black, the plaid jacket’s lining is silk, and the other’s is acetate, so they look and feel different; I know I’m cobbling together the outer parts, but I don’t like doing that with the linings too in this case. I’ll have the opportunity to use a fun new lining fabric (wait ’til you see what I found!), and I’m only replacing the body lining, not the sleeves, which simplifies the process. Also, I can use the existing lining parts as patterns for the new lining, so it’s not like I’ll have to draft a custom pattern. I like this idea!

But first things first. I’m starting by pinning the parts together at the waist (keeping the linings free):

Pinning parts together at waist. Note that although the original linings are still in place (more or less), I’m keeping them strictly out of my way at the moment; I only want to sew together the outer layers of the 2 jackets.

Matching seams for even spacing. Here, the dotted red line shows where I’ve matched the side seams of the 2 jackets while pinning the waist seam together.

Tip: Pinning matching seams, like the side seam shown above, is the easiest way to ensure even spacing when you’re trying to fit together 2 different jackets. In my case, I was extremely lucky that the 2 pieces were almost exactly the same size at the waist. However, you may find that the lower piece is bigger around than the upper piece; in this case, you can either take in the side seams of the larger piece, or ease the larger piece to fit the smaller one, with darts, gathers, or pleats.

I sewed the waist seam twice (the second time was 1/8″ inside the first seamline), including the facings of both jackets.

After stitching the waist seam, there are a few things I want to get done on the inside of my Franken-Coat before I start on the lining: fix the pocket that has a hole, and add shoulder pads. Oh, and I should also do something about belt loops too. 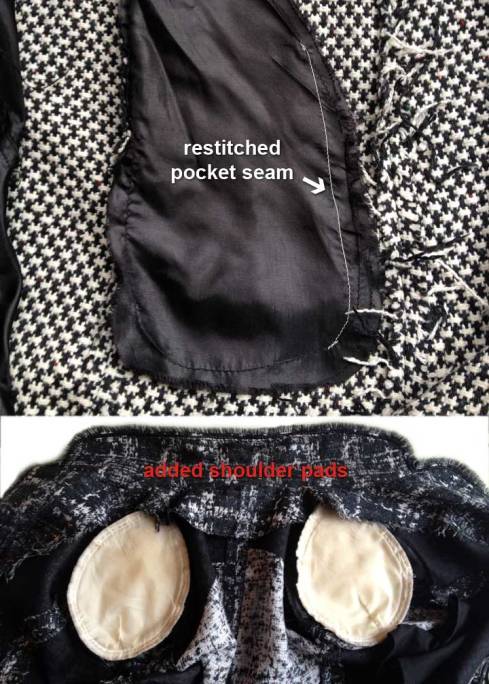 Pre-lining chores. Top: the pocket, made from lining fabric, started raveling, resulting in a good-sized hole, so I restitched it (I used white thread so you could see the new stitching, since it wouldn’t show on the outside). Bottom: I hand-tacked substantial shoulder pads into the top part, partly to create a nicer shape, but also to help support the extra weight added by the second jacket on the bottom.

Now for the belt loops. Although neither jacket had them originally, I felt I’d like them, primarily to help create a transition between the 2 different fabrics. On the other hand, this is a fairly lightweight coat, therefore not something I’d necessarily wear when it’s very cold, so how often would I really belt it? What to do, what to do…

Then, as I was picking up the leftover jacket parts, I had an idea. Maybe I could use the pocket flaps from Jacket 1! I know, I know, how do they resemble belt loops? Well, they don’t, but bear with me. Here’s one of the flaps:

Using pocket flaps as belt loops. To my eye, this helps create a transition between the 2 jacket parts, and because they function simply as design details (not just belt loops), I can wear my Franken-Coat with or without a belt!

After I bound the raw edges with bias strips of my lining fabric, I pinned my belt loops in place before stitching: 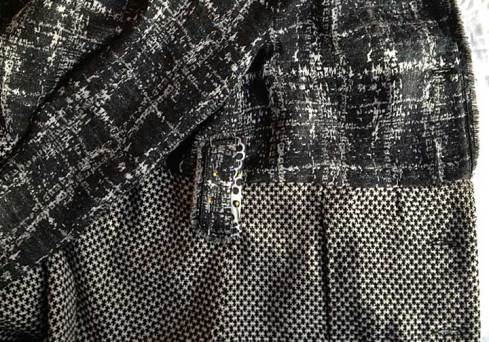 Pinned belt loop, ready to stitch in place at side seam. See what I mean about creating a transition between the 2 parts? Note the bias binding on the right side of the loop, made with the fabric I found to make my new lining. And speaking of which…

… It’s time for the new lining!

I really liked the idea of putting in a printed lining, hopefully something black-and-white, bold, and graphic. Much to my surprise, I actually found this with the other linings: it’s acetate (commonly used for ready-to-wear linings, not my favorite, but I can live with it), an amazing 62″ wide, and look at this print!

New lining fabric! (This is a double layer of a lightweight fabric, so you can see a bit of the design showing through from the layer underneath.) $6.99/yd., by the way, and because of its surprising 62″ width, and the fact that I wasn’t making new sleeves, it only took 1 yard!

It took a while, but I removed all the original lining parts from the jackets, leaving behind the sleeves, since they’re still in really good shape (and silk!). I then pieced together these lining parts to make a pattern for the new lining:

Cutting my new lining. After sewing the old linings together at the waist, they become the pattern for the new lining. In the left-hand photo, I’m simplifying the shaping, indicated by the dotted red line, with the fold of the fabric on the right; I’m allowing 1″ extra along the fold line for a pleat that will run vertically along the center back. At right, my new lining piece after cutting.

All I have to do is sew the shoulder seams in the new lining, attach it to the existing sleeve linings, then attach it around the front/neck edges. 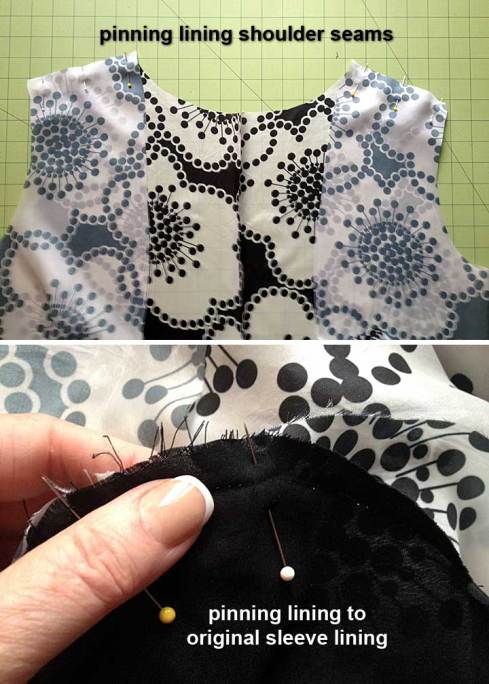 Lining seams: First the shoulders, then the sleeves.

At this point, once I’ve pressed these new seams, and pressed up the lower edge of the lining 1/2″, I’m ready to machine-stitch the outside edge of the lining into the coat; this will start at the bottom edge of the facing on one side, travel up the front and around the back neck facing, then down the facing on the other side. (I apologize for not having photos of this part; both hands were fully involved in this part of the process!) Then I hand-stitched the lining hem in place: 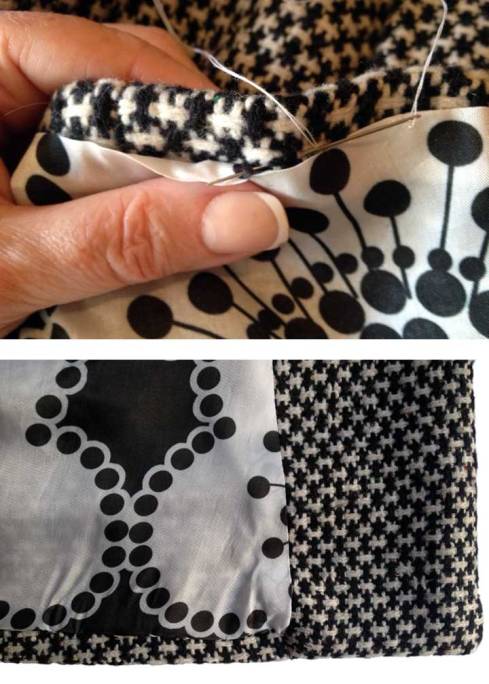 Finishing the lining hem. With the hem edge of the lining pressed up 1/2″ (prior to machine-stitching the lining around the fronts and neck edges of the coat), it’s ready to hand-stitch into place (top). The bottom photo shows the inside of a front facing with the new lining all finished.

Important note: Replacing a lining in an existing garment is a subject that could easily take up several posts in itself; I’m just hitting the highlights here. And every project is different, especially when you’re putting 2 unlike jackets together! Please feel more than free to ask me directly if you have questions about making a new lining for your own project.

I almost forgot about the buttons! (How could I?!) I had some amazing poppy buttons in mind for this project from the start:

Trying poppy buttons. Much as I love them, I decided against them because a) they’re too big for any of the existing buttonholes, b) they’re too lightweight for the weight of Franken-Coat, and c) because I think they might limit the outfits I could wear this otherwise neutral coat with. On to Plan B…

Digging through my considerable button stash, I of course could not come up with anything that was the right size, color, and quantity (why do I have 3 of everything, but not 4??). Then it hit me: this is Franken-Coat! Buttons don’t need to match! But since I do think that when things don’t match, they work best when they have at least one element in common, I decided black and gold might be a good combination: 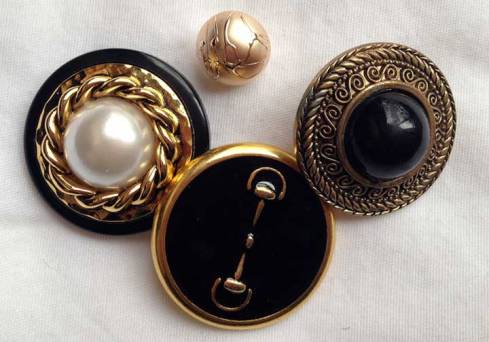 Mismatched buttons. My feeling is that, when using mismatched buttons (as with mixing prints), if there’s at least one element in common, it should work. In this case, it’s the black-and-gold colors. Read on to find out what’s up with that tiny gold one…

Once again, although I found 3 black-and-gold buttons that were all approximately the right size, I needed one more. Apparently desperation to get tutorials finished is the mother of creativity, because I had this idea to use one of the existing buttons from the lower Franken-Coat part, which has a convenient recessed part in the center, and add the tiny gold button to that! Here’s a trial run of my 4 new buttons:

Trying my new button idea: The button that’s third down from the top started with the existing black button, to which I sewed the tiny gold dome-shaped button in the center. Doesn’t it look great?

Whew! After sewing on the new buttons, and giving my new coat a good steam-pressing, I think it’s time to step away from the CYC lab! First, though, I know you’ll want to see how my Franken-Coat survived all this frantic experimentation. Lovely readers, I give you…

Now I just have to think of something to do with the leftover jacket parts. Perhaps Franken-Coat, the Sequel, will be coming soon!

Makeover Mondays happen (well, usually) on the second Monday of each month. Join me!

Sharing memories along with my grief journey

Adventures in Sewing and Beading

RYA Sailing School & Yacht Charter based in Cowes, the home of sailing, making sailing fun and accessible for all.

Exploring the world together, one port at a time

Classical Chinese tales of the strange and anomalous, translated (roughly) by Geoff Humble.

Sharing what I'm seeing, in words and photographs

The practical pleasures of living in color

A Plus Size Sewing Community

Sewing up a self-made wardrobe

General sewing with a focus on use of color

My sewing show and tell